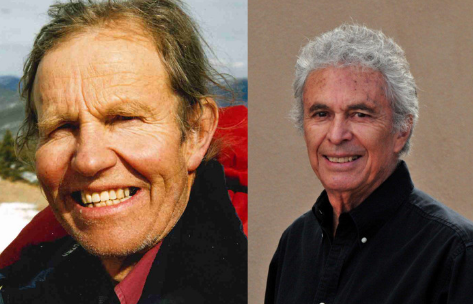 SOMOS sponsored Prose Month is not losing any steam as it moves into its third weekend of multiple nights of readings by regional authors. Audience attendees can expect three nights of talented writers displaying their creative enthusiasm for prose. Prose Month Curator, Johanna DeBiase said, “This weekend offers a ton of talent, as well as, a not to miss evening with Nasario Garcia and John Nichols. You might want to buy tickets ahead.”

On Thursday November 14, at 5pm, accomplished memoirists Patricia Pollard and Marlayna Glynn will share their heartfelt stories. Pollard, a photographer and painter, relocated to Taos in 1990 where she set aside her visual art to write a memoir, “Long Time Lost,” which was published by Nighthawk Press in 2018. Marlayna Glynn is an award-winning storyteller who writes and works with a wide variety of authors. She has edited and written over 40 published books that span the genres of memoir, biography, thriller, and business education. Her articles have been featured on Huffington Post, PBS Next Avenue, Elephant Journal, The Good Men Project, and her work has been translated into many different languages. Marlayna considers herself fortunate to have returned to her maternal grandmother’s birthplace in New Mexico.

On Friday, November 15 at 7pm, friends and writers John Biscello and Joe De Patta will read. DeBiase said of the upcoming event, “Expect a lively and creative performance, not your ordinary reading.” Novelist, poet, playwright and arts educator, Biscello is the author of three novels, a short story collection, and a volume of poetry. His new poetry book, “Houses of a Crystal Muse,” a collaboration with Antoinette Nora Claypoole, will be published by Wild Embers Press this December. He will also be directing a short film he wrote, “Ballad of the Cuckoos,” which will be filmed in Taos. Joe De Patta spent his adolescence in the North Beach neighborhood of San Francisco. When he was kicked out of jazz clubs for being underage, he drifted to the poetry section in the basement of City Lights bookstore. He has written two novels, many short stories, poems, and essays.

The third workshop in the Prose Month series will be taught by Prose Month Curator DeBiase on Saturday, November 16, from10am-1pm and costs $40 for SOMOS members and $45 for non-members. “The Power of the Dark Side: Creating the Perfect Adversary” is for every prose writer in all forms and genres including short fiction, novels, playwrighting and memoirs. “This class is a spin-off of the popular class I taught this summer at the Taos Writers Conference. ‘Zero to Hero’ was about Campbell’s 8 Archetypes. I will be focusing on only one archetype this time, the Shadow,” DeBiase said. Drawing from Carl Jung and Joseph Campbell, this class will examine the shadow side of your main character to create more fully established villains and rivals worthy of your stories. Students will create work that can be used for current or future character development in all their writing. DeBiase is the author of fabulist novella Mama & the Hungry Hole (Wordcraft of Oregon, 2015). Her poetry chapbook, Gestation (Finishing Line Press, 2020) is forthcoming. Originally from New York, she earned her MFA in Creative Writing from Goddard College.

“But perhaps the most exciting event of the weekend, or all of Prose Month, takes place on Sunday,” DeBiase said, referring to November 17 at 5pm. “Two well-known and well-loved authors will share the stage in celebration of New Mexico, friendship and living life to the fullest.”

According to his bio, Taos’s own, John Nichols has published twenty-two books (13 novels, 9 works of non-fiction) and once spent twenty years writing Hollywood screenplays (Missing). Some of his novels include “The Milagro Beanfield War,” “The Sterile Cuckoo, & The Wizard of Loneliness” – all of which have been made into films. He moved with his family to Northern New Mexico in 1969 and has been fishing, hiking, and writing (sometimes all night long) his many drafts of different manuscripts since then. An avid environmentalist, political commentator and observer of the vagaries of human experience, his legacy covers a diversity of topics. Nichols will be reading from his memoir in progress.

Write-ins, opportunities for writers to schedule two hours of uninterrupted time to write, will continue to take place throughout the month at SOMOS on Wednesdays 4:30-6:30pm and Sundays noon-2pm in the back room. This is free and open to everyone.