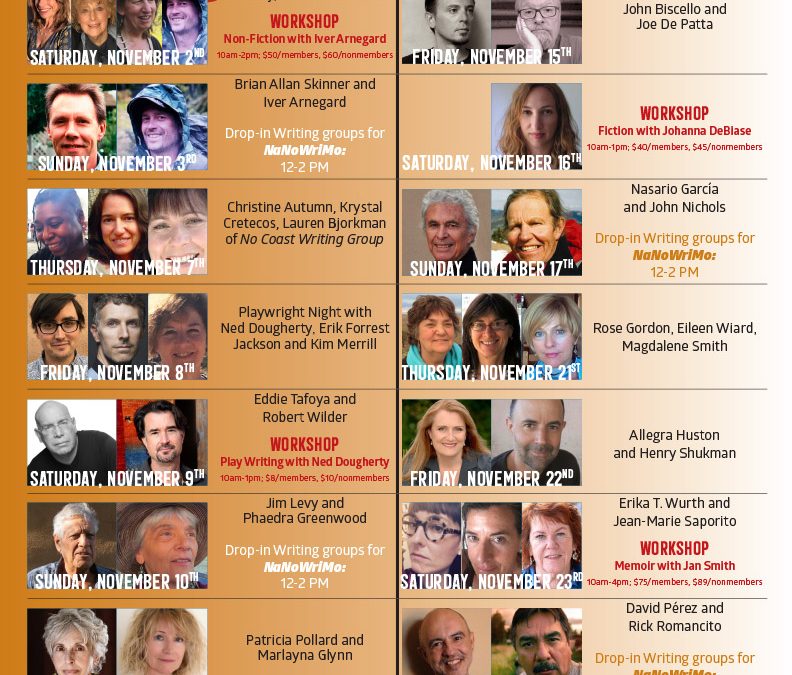 Prose Month was established three years ago by SOMOS Director Jan Smith, a memoir writer, in order to celebrate prose writing. Up until then, SOMOS had hosted a Winter and Summer Writer Series but cancelled these in favor of the Taos Writers Showcase, which invites four nationally and internationally known writers to Taos each year. Since SOMOS already had a Poetry Month, it became apparent that a Prose Month would also be needed. This year’s Prose Month invites authors from farther afield to join local writers for readings every weekend of November, except for Thanksgiving.

The first week of Prose Month sets a great example for what the month ahead has to offer. Taos’s own, Mirabai Starr will present on Saturday. Starr is a world-renowned author, teacher and speaker who has received critical acclaim for her revolutionary new translations of the mystics, John of the Cross, Teresa of Avila and Julian of Norwich. She is also the award-winning author of “God of Love: A Guide to the Heart of Judaism, Christianity and Islam,” “Caravan of No Despair: A Memoir of Loss and Transformation,” and “Mother of God Similar to Fire,” a collaboration with iconographer, William Hart McNichols. Her latest book, “Wild Mercy: Living the Fierce & Tender Wisdom of the Women Mystics,” was published in Spring 2019.

Johanna DeBiase is the Curator of Prose Month responsible for inviting the writers and organizing the events. “I don’t think people in Taos appreciate that Mirabai Starr lives here and is able to present her work so generously to us. She is booked months in advance and it’s really a special treat to have her join us for Prose Month,” DeBiase said.

Starr is a spiritual writer of creative non-fiction and contemporary translations of sacred literature. She taught Philosophy and World Religions at the University of New Mexico-Taos for 20 years and now teaches and speaks internationally on contemplative practice and inter-spiritual dialog. A certified bereavement counselor, Mirabai helps mourners harness the transformational power of loss.

DeBiase said she wanted to find writers to share the spotlight with Starr who wrote with similar spiritual sensibilities. One such writer is Debora Seidman. Seidman leads writing workshops for women trauma survivors and Soul Writing Journeys for students around the world via teleconference. She has also won awards for her plays, poetry and fiction, which have been published by a variety of journals. She has twice been awarded a writing fellowship at the Helene Wurlitzer Foundation.

Rabbi Judith HaLevy is travelling up from Santa Fe to join Starr and Seidman. DeBiase said of HaLevy, “I was inspired by the Rabbi’s sermon at Rosh Hashanah services. In fact, I am inspired by all her sermons. She always tells beautiful stories both personal and allegorical with a hint of humor.” HaLevy, who lived in Taos from 1976 to 1992 and raised her family here before moving to California, is currently the part-time rabbi at Taos Jewish Center.

Starr, Seidman and HaLevy read together on Saturday, November 2nd at 7pm. “I guarantee a big joyous soul opening of your heart if you attend,” DeBiase said of the event.

The following evening, November 3rd at 5pm brings well-known local author Brian Allan Skinner to the dais with a newer arrival to the SOMOS Salon, Dr. Iver Arnegard. “I love both of these authors’ works and envisioned an evening of quality writing from a couple of pros,” DeBiase said.

Skinner read at Prose Month last year when his most recent story collection “Shoot Me, Jesus: Tales of the Old & New Southwest” was recently published. This year, this prolific writer has another book out from Nighthawk Press, “The Magic of Kindness: A Novel in Short Stories.”

Arnegard, who splits his time between New Mexico, Colorado and Alaska, won the 2014 Gold Line Press Award for his short story collection, “Whip & Spur.” He has published nonfiction, fiction, and poetry in the North American Review, New Oxford Press, River Teeth, and elsewhere. Currently he heads the Creative Writing department at Colorado State University in Pueblo.

Arnegard will also be teaching a workshop on Saturday, November 2nd from 10am-2pm. The cost is $50 members/$60 non-members. This workshop is titled, “Writing Through the Pain: Overcoming Loss in Creative Non-fiction,” and will provide an overview of the craft of short, creative nonfiction as well as helpful tips for editing and publishing your own writing. By the end of this four-hour workshop, students will have completed their own essay after studying published works.

Every week during Prose Month there are two write-ins. Write-ins are opportunities for anyone interested in joining a group where you will do nothing but write together in silence, a great means of holding each other accountable for writing. Wednesdays from 4:30pm-6:30pm and Sundays from 12pm-2pm. Everyone is welcome. There is no cost.

The readings cost $5 for members and $8 for non-members. They all take place at SOMOS 108B Civic Plaza Drive. For more information call 758-0081 or email somos@somostaos.org or visit their website at www.somostaos.org